Where the wild things are: nature holidays in Europe 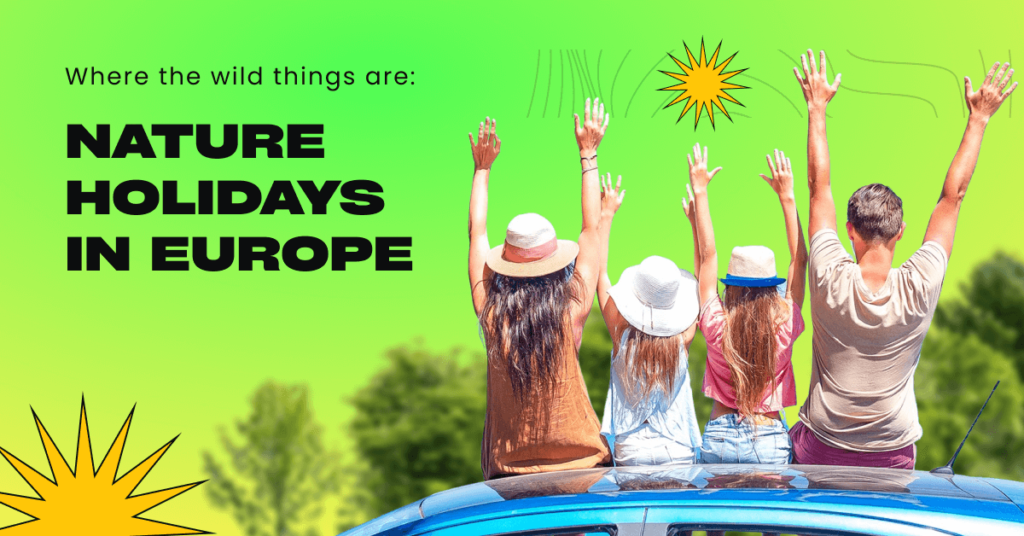 Deep in the Portuguese countryside, close to the Spanish border, a family of four sit quietly, cameras at the ready inside the darkened interior of a camouflaged bird hide. Outside the hide, spinning dark shadows formed by a flock of vultures spiral in ever decreasing circles, their silhouettes growing larger as the birds descend lower and lower.

On a rocky outcrop 5 meters from where the family wait patiently, a steaming pile of meat and bones has already drawn droning swarms of flies, but still the birds circle.

As if with some unspoken command, a solitary vulture lands with great flapping wings and stirs the scent of raw meat in the air. Then a second, then another, then ten, until the outcrop is alive with wings, beaks, and the squabbling of over one-hundred tawny-feathered scavengers.

Inside the hide the family grab for their cameras and phones eager to capture the unfolding action. Despite the presence of devices on which to capture such a marvel of nature, the experience is unforgettable and is guaranteed to last a lifetime in memory.

The place in question is the Faia Brava Nature Reserve, a hidden natural paradise in Portugal’s Côa Valley, 230 km east of the northern city of Porto. To get to this secret corner of the country a car is a must, but with multiple car rental options from Discover Cars, the two and a half hour journey through some of Portugal’s most memorable scenery becomes an integral part of the adventure.

The reserve draws nature lovers from around the world, due in part to its prominence as part of the Europe-wide rewilding programme created under the guidance of the international body, Rewilding Europe.

Rewilding Europe’s objective is to breathe life back into the natural landscape, helping people to reconnect with the wonders of Europe’s spectacular wild nature and to create a landscape where people and nature can not only co-exist, but flourish. Here at Faia Brava the mission, while still a work in progress, has proven a major success with locals, visitors, and the project’s managers alike.

Since the Faia Brava project was initiated in the year 2000 its successes have included its expansion to over 100,000 hectares to include neighboring wild places and protected areas. It has measured its success in the introduction and reintroduction of wild and endangered species such as boar, roe and red deer, vultures and eagles, wild cattle and horses, and the revitalization of many other under-threat flora and fauna species.

Along with its value to nature, Faia Brava allows visitors to experience life lived at a different pace in a landscape long-forgotten by modern living. The reserve even includes several luxuriously-appointed safari-style tents named Star Camp, where visitors can experience a night in the wild, sleeping under the stars unpolluted by light, before waking to the sound of birds signing, the buzz of bees in the flower-scattered fields, and the sight of an eagle riding the thermals above the cliffs that flank the Côa River Valley.

With similar projects in operation right across Europe, Rewilding Europe is bringing wild Europe closer to families, nature lovers, and those who simply want to experience and help protect nature as it was meant to be.

Widely regarded as one of the most diverse wild landscapes anywhere in Europe, Romania’s southern Carpathian Mountains is home to wolves, Eurasian lynx, wild cats, brown bear, red deer and roe deer, chamois, wild boar and many more species of wildlife unique to the region.

For nature lovers and escapists seeking a real Romanian wilderness experience, Omio.com offers accommodation in the country’s capital, Bucharest, or in the medieval city of Brasov, the gateway to the great Carpathian mountain range.

The mountain range itself spirals right through the country’s heartland, and it is here, in the southernmost range that an initiative is in progress to create Europe’s largest wild landscape south of the Arctic Circle.

With an area totaling more than 1 million hectares of pristine protected spaces already in existence, the project is well on its way to becoming a reality. However, due to large-scale hunting in the past, wild animal populations are low but showing good signs of recovery year after year.

With the abandonment of farmland, and in conjunction with the area’s natural scenic beauty, traditional heritage, and cultural attractions the Southern Carpathians have the potential to become an area of elite natural tourism for both homegrown and international visitors.

Scotland’s national poet, Robert Burns, was so in love with the Scottish Highlands he was prompted to write ‘My heart’s in the Highlands, wherever I go’.

If you’ve ever visited the mottled landscape of glens, ancient pinewood forests, and heath-covered mountains, either in person or on the silver screen, you’ll understand exactly why the great poet was was so in love with these wild and sparsely inhabited places.

The Scottish Highlands form an imposing wild barrier between the country’s north and the southern cities of Glasgow and Edinburgh, and call hikers, hill walkers, cyclists and lovers of adventure sports and nature at its wildest from all over the world.

Rewilding Europe have already initiated a 30-year naturally-induced return to the wild project, which will create a hugely valuable refuge for multiple species of endangered flora and fauna across a shared network of peatland, woodland, grasslands, and wetlands.

The whole project was made possible by the coming together of the region’s landowners and their commitment to the wild regeneration of the natural landscape. This initiative involved reconnecting pockets of land across different habitats and provided much-needed natural highways and corridors for the free transit of wildlife across the entire region.

In addition to the process of rewilding, the initiative is beneficial to the local communities by promoting a nature-based economy centred on wildlife tourism and sustainably produced natural products. The eduction of the next generations also plays a major part in the rewilding process, ensuring that those who come in future generations will fully understand and appreciate the concept of rewilding.

For visitors to the Affric HIghlands, one of the best ways to fully appreciate the beauty of the Highlands, and Scotland as a whole, Britannia Hotels offer a choice of great accommodation options in the cities and the highlands, giving you the very best of both worlds.

Covering almost a quarter of the country, Swedish Lapland stretches from Sorsele in the Vasterbotten province all the way north and deep into the Arctic Circle. It has been described as a place of huge opportunity for every lover of nature and the great outdoors. From hiking, dog sledding, photography, bird and wildlife watching to experiencing the Northern Lights in one of the most impressive landscapes to be found on the planet, the region offers unlimited opportunities for totally unique holiday experiences.

Swedish Lapland can best be described as an untamed and wild place full of natural wonders that can be experienced nowhere else on earth.

The main draw for visitors to this pristine wilderness is the isolation, the beauty, the opportunity to view wildlife up close, and the uniqueness of thousands of miles of uninhabited, road-less wild nature.

However, Rewilding Europe are fully aware of the threats imposed by modern living, pollution, climate change, and habitat destruction, and for these reasons have designated the region as suitable for participation in the European programme.

Lucky visitors who are brave enough to immerse themselves in such a wild environment are sure to be rewarded with possible sightings of giant elk, wolverine, lynx, bears, and herds of migrating reindeer stretching from horizon to horizon as they wend their way through the valleys between snow-capped mountains and old-growth taiga forests.

The region is also famous for being home to three of Europe’s wildest and most untamed waterways, the Rane, Kalix, and Pite rivers. Stretching to over 3 million hectares the region is home to fewer than 1,000 permanent residents, putting it top of the list for lovers of unspoiled nature and outdoor experiences like no other.

The possibility to see wild bears and wolves roaming in their natural habit among forests of beech and ash, on sparse hillsides, or open meadows and grasslands less than two hours from the Italian capital, Rome, seems unbelievable for many. But it’s possible, thanks to the efforts of those dedicated to the rewilding parts of Europe for the benefit of every inhabitant.

Considered as the spine of the country, the Apennines mountain range is defined by centuries-old large beech forests, some of the oldest forests in Europe, along with landscapes that have witnessed some of history’s greatest stories.

In fairytale mountain forests, lush with green mosses and ferns and dappled by the bright Italian sunshine, red deer, roe deer and wild boar keep a wary watch for the packs of wolves who call the region home. In fact, some areas of the Apennine Mountains hold the largest packs of wolves to be found anywhere in Europe.

Along with the wild native species of fauna who inhabit the forests, herds of unfenced horses and cattle are also free to roam at will, and in turn become prey for the apex predators of wolves and bears — including the Marsican brown bear, a subspecies endemic to the region — who share their wild wonderland.

The centrality of Italy’s Apennine Mountain range means that wild nature lovers can mix the solitude of nature with the bustle of some of the country’s most historic and cultural sites and cities — Rome, Perugia, Naples, and Foggia. If the idea of enjoying breakfast within sight of Rome’s famous colosseum and lunch in the foothills of the 3,000 meter mountain peaks as eagles turn slow circles in the sky above sounds appealing, then the Wild Heart of Italy is waiting for you to answer its call.