The rise of ‘geek chic’

Apparently ‘geek chic’ is a thing once again, and a pretty cool thing at that.

Geek chic goes a long way toward explaining the rise of electric-blue hair, manga-influenced clothing, glasses the size of car windscreens, too-short trousers, mismatched socks, garish ties, a love of comic books, and the constant chatter about games, platforms, and consoles that sounds – at least to me – like Mr. Scott’s technobabble in an old episode of Star Trek.

What is a geek?

According to Google, a geek is described as the following:

‘A digital technology expert or enthusiast’ and/or ‘a person with excessive enthusiasm for and some expertise about a specialized subject or activity.’

Both of those descriptions sound like people I both work and socialize with, and admire greatly. Many of my friends it seems are geeks and I’m fine with that.

They’re good people, with a love for things that most people find weird, nerdy, or unusual.

They like science fiction like Star Trek, fantasy books, movies, and board games, and they know more about the weaponry of a Romulan war bird than most people consider healthy.

They can quote monologues from Star Wars, Harry Potter, Game of Thrones, and even Rutger Hauer’s ‘time to die‘ speech from the movie Blade Runner. (Nerd Alert: I refuse to call it Blade Runner I – there is only one Blade Runner).

They like Manga, Anime, and television series that others call goofy. They collect stuff that most regard as ‘junk’. Their interests include Dungeons & Dragons, and role-playing games, and they accept others with similar tastes as being part of one big international family.

And when their birthdays or other holiday occasions roll around every year, they like to receive gifts; just like everyone else, except they like their gifts a little more nerdy.

Buy thoughtful gifts for them and get up to 9% back as Monetha points ~. Spend them on gift cards, crypto, or charity.

So what type of gift do you buy for the geek in your life?

A yearly subscription to a Marvel comic book, some original Manga artwork or Anime cartoon sketches, a scale model of the Star Trek USS Enterprise, an original toy character from a movie or tv show, a realistic lightsaber, games or game consoles for the addicted gamer, or how about a personalized Harry Potter ‘magic wand’?

There are collectibles like movie props, limited edition Manga books, rare baseball and football cards, and action figures in their original packaging, all of which would make excellent gift ideas, and pretty neat investments.

The short answer is, they can be. The rarer the item, the more expensive it’s likely to be.

Before shopping for gifts – for both geeks and non-geeks – download the Monetha app and collect great rewards (with every online purchase) that can be exchanged for gift cards, crypto, or even charitable donation. Also, you can make huge direct savings when shopping online with Monetha partners.

From cosplay to Naruto

OK, we know everyone is different; they have their favorite characters from movies, books, games, and even real life.

They like different things. Some live their lives in darkened rooms pitting their skills against gamers from around the world, and others with a passion for cosplay spend their time and money searching for new costumes, additions, and accessories.

Others hunt and collect rare and limited edition souvenirs from series like Sailor Moon, Pokemon, Naruto, Death Note, Attack on Titan, and the other heavyweights of Japanese animation.

But even if you know what they like – on the surface – finding unique gifts can be almost impossible if you don’t happen to inhabit the same galaxy as your unusual friends.

So, to paraphrase the Star Trek legend, James Tiberius Kirk, let’s boldly go where no one has gone before, to seek out new life, new civilizations, and a gift idea like no other.

Obi-Wan Kenobi the Jedi Master acts as the mentor to young Luke Skywalker and guides him through the use of the Force in the fight against the Galactic Empire. Who wouldn’t love this 1:6 scale figurine watching over them as they battle the evil empire online?

An official Star Wars lamp that continuously receives good reviews on collector websites everywhere. This stylishly designed LED desk lamp has all the good looks and flexibility of the original Millenium Falcon.

It is built with top-quality materials and minute attention to detail, this spectacular 60cm tall desk lamp is a true replica of the iconic spaceship and a must-have for every Star Wars lover and collector. 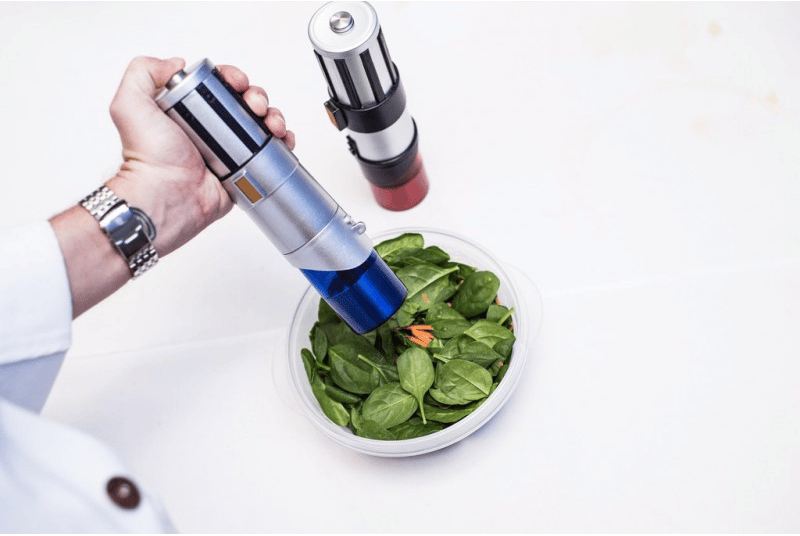 If you’re a true Stars Wars fan or collector, can you ever happily eat dinner again without a matching set of lightsaber salt and pepper grinders?

If the answer is no, then you really need these amazingly designed table toppers – replicas of the lightsabers of Darth Vader and Anakin Skywalker – guaranteed to be the talk of the dinner table in any galaxy, nearby or far far away.

This brilliantly designed gift box is a collection of the very best Star Wars playthings, games, memorabilia, homages to the movie series, and much more, and is sure to put a smile on the face of every true fan.

Available only online from lafrikileria.com, this unique gift box features between 5 and 9 original surprise items.

The Star Wars Stormtrooper, the shock troops and space marines of the Galactic Empire, might be the baddies of every Star Wars movie, but their iconic look will always turn heads.

Now you can begin to create your very own Stormtrooper costume and command your own Legion with this foundation ladies’ jumpsuit. From here you can build your uniform piece by piece until you have the full and classic Stormtrooper look.

A world of Harry Potter-themed surprises

For Harry Potter fans this is the golden snitch of ultimate gifts. A spectacular replica of the actual model Nimbus 2000 used by Harry Potter when he played as a seeker for the Gryffindor quidditch team.

The 160cm hand-made replica is a numbered limited edition with only 10000 pieces crafted for worldwide distribution. Your Nimbus 2000 comes with a numbered metal display plate along with a corresponding number and certificate of authenticity.

This is no mass produced spin-off, this is the real thing straight from the Harry Potter film series. A fantastic and realistic replica of the mysterious diary of Tom Riddle that also includes a pen-shaped wand that writes in invisible ink.

The secret diary also comes with magic ink for writing secret spells and hidden messages that can only be revealed by the magic of the wand itself. The diary is made from aged leather and comes complete with an external plate marking it as the property of Tom Marvolo Riddle.

Wizardry can be a stressful occupation with giants, dragons, ogres, death eaters, and he-who-must-not-be-named to deal with. An anti-stress chocolate frog is a perfect antidote to relieve a hard day of magic, sorcery, and saving the world of muggles and magic.

This soft replica of the original Harry Potter chocolate frog comes in the original 1:1 scale and is presented in the original packaging. A really special gift that gives endless fun, and eases the stress of long hours of learning spells, potions, and magical incantations.

Quidditch fans will love this brilliantly designed flying golden snitch. The snitch is an exact replica of the original and features flapping wings and propellers that make it really fly – just like magic.

The golden orb comes with several flight modes, such as random flight or directional flight, and operates with two 1.5 V batteries. Can you end the quidditch game and catch the Golden Snitch, just like Harry did?

Replica of the sword of Godric Gryffindor

When Harry Potter defeated the Basilisk the trusty sword of Godric Gryffindor had its part to play. Now, you too can share in that epic adventure by owning an exact replica of the magical sword, crafted by the experts in the recreation of movie magic, Noble Collection.

The 86 cm sword features stone inlays set into a beautifully crafted wooden handle along with the Gryffindor coat of arms. This unique piece will be the main attraction in any serious Harry Potter fan’s prize collection.

Photo by Fredrick Tendong on Unsplash

If you’ve been asleep under a rock for the past thirty years or more, gaming is the name associated with the playing of electronic games on computers, consoles, mobile phones, or other mediums.

It also refers to regular game playing as a hobby and not as a one-off. Gaming is usually practiced solo and is a form of deep relaxation for many ‘gamers’, however, multiplayer video games have turned gaming into a modern international group activity.

If you know a dedicated gamer finding the right gift for them shouldn’t be a problem, whether it’s a game, an upgrade, a new console, or a new gaming platform..

However, for more hardcore gamers – the ones who build their own dedicated hardware, tweak the original software, and rarely leave their darkened room – you’ll be best advised to buy them a gift card or coupon. After all, what do you know about hardcore gaming?

Gaming is such a huge global multi-billion business that there are tens of thousands of websites dedicated to gifts for gamers. But how do you find the best deals?

When you join an online rewards platform like Monetha, you’ll get access to the resources of multiple websites offering great discounts on your actual gift purchase. You’ll also earn accumulative points than can then be used to exchange for gift cards, crypto, and even charitable donations. It’s a win-win situation.

Looking for a gift for a hardcore games lover can be a pretty daunting task, especially if you don’t have a lot of money to spend.

That’s when you need internet stores like Eneba, an online store dedicated to gaming. Eneba buy and sell new and second-hand games, consoles, PCs and other gaming accessories where you’re sure to find everything your gaming-addicted friend might need, no matter their age.

And here’s the cool part, Eneba is part of the Monetha rewards platform which means that you’ll receive valuable Monetha points every time you make a purchase. You can then use the points to make further purchases, or redeem them for gift cards, crypto, or charitable donations.

With huge resources, and vast stocks of everything from epic games, action games, MMO games, and racing games to steam games, sports games, and accessories for every platform, means that if you can’t find it here, it probably doesn’t exist.

Photo by Alex Haney on Unsplash

Kinguin is another go-to site selling games and game keys with a huge range of titles to suit all ages and gaming tastes.

They also specialise in selling skins and other digital goods that can be redeemed in-game.

And the real beauty? Just like Eneba, Kinguin are also a Monetha rewards platform member entitling you to reward points every time you shop online with them.

Plus, discounts, loyalty points, and in-game credits can be earned as rewards using the Monetha App. If you want to make great savings and earn valuable rewards, sign up for the Monetha App today.

Buy thoughtful gifts at La Frikileria and get 9% back as Monetha points ~. Spend them on gift cards, crypto, or charity.
Get deals
Brendan Harding

Get free gift cards as rewards for your everyday shopping.