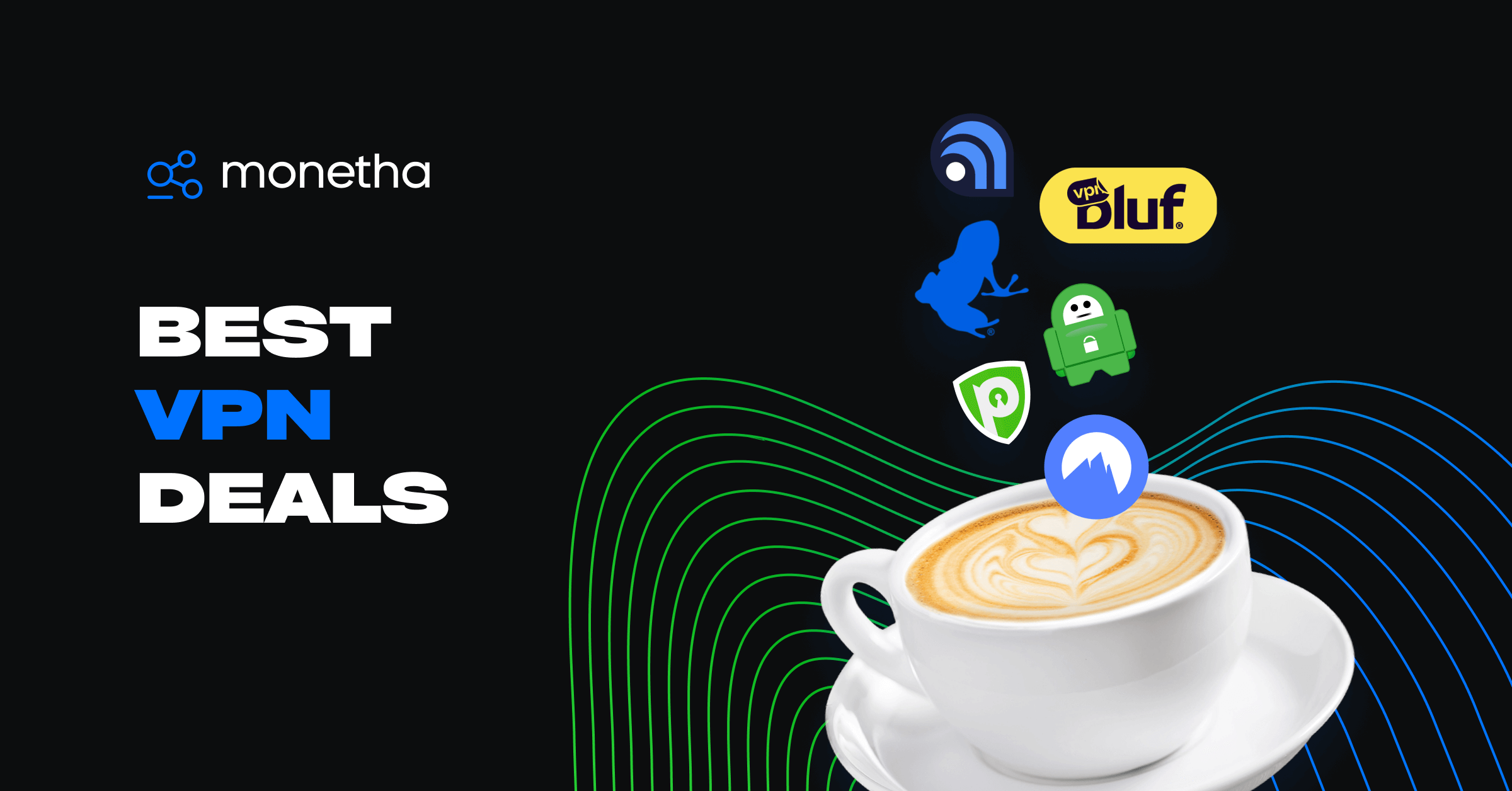 Cybercrimes have become a much more significant threat than real-life crimes throughout the last few years, as they are so frequent nowadays. Stealing data from mobile phones and computers has become an enormously profitable business – robbing people of their identities, money, and personal information.

But luckily, one term flipped on the Internet over a decade ago – VPN. The first VPN (then named PPTP) dates back to 1996.

This technology has let people control their online privacy and enjoy browsing without worrying about someone trying to use their data without permission.

What is VPN, how does it help people, and which are the best VPN deals today? Let’s find out in the article.

What is a VPN?

No one wants their data to be tracked. Whether it’s for ad purposes or malicious attacks, people prefer their searches to be encrypted.

A virtual private network (VPN in short) creates a private network across a public network and lets you send and securely receive data. It makes sure that your internet communication is safe from prying eyes and hackers.

A VPN also creates a “tunnel” between your computer and the remote servers, and it helps you use the Internet without restrictions or limitations.

In other words, the VPN is a “mask” that encrypts your information before you log it online.

Also another trend is Mobile VPNs. They allow businesses to extend their private network and private applications across public networks – by connecting a device or computer to a private network. They can gain access to a secure, high-speed, encrypted tunnel to move data securely between the two networks.

Across multiple devices and platforms, corporations can ensure that their employees have secure connections between their devices and their remote offices without sacrificing performance. And how big of a role VPNs played when the pandemic has hit and cyber crimes spiked!

How do you pick the best VPN provider?

No matter what kind of software customers pick, they are always looking for an exclusive deal they can get from reputable VPN providers. But which are the criteria for identifying the best VPN deal you can make. Let’s see.

If you’re tempted to find the cheapest VPN services or go for something “free,” you should know that nothing comes for free. If you go for the most affordable option available, you’ll sacrifice bandwidth speed and get bombarded with ads. And that’s a minor evil. Some unreliable VPN providers can even sell your data. Does it make sense to protect your data from person A to see it used by person B?

With the growing demand for VPN services, it’s no wonder that new companies are popping up left and right. Many of these have been started by individuals who might not have any experience in internet security. Before committing to a long-term subscription with a VPN provider, make sure the other side is secure enough.

When looking for a VPN, it’s essential to do your research. There are countless VPN comparisons and reviews available on the web. Some of them are paid advertisements, and others are independent analyses. It can be extremely challenging to tell the difference between the two, so make sure you trust quality sources before purchasing. The “best deals” might be wannabes with bought reviews.

Check the home country of your provider

VPN providers must follow the laws of their home country. Although these laws can be confusing and are constantly changing, it is crucial to know where your VPN is from. Before you decide, check where your provider is located and the right to be served a warrant by authorities.

Unlimited data, unlimited devices, and all that sounds great – but if it is at the expense of data leaks, is it worth it? Try to find providers based in countries that are more liberal, and the governments won’t force them to spy on you.

Many users tend to “check” everything without reading the blueprint. And that’s a mistake.

If you want to prevent your personal information from being shared with third parties, it’s crucial to look at the privacy policy and know what your VPN provider is sharing. Some providers may share customer data with third parties to track user trends and preferences or profit from their audience. Always research VPNs to ensure reliability before committing to a VPN subscription..

Good VPN services offer a lot of value for your money. Let’s see some of the big names here.

NordVPN is the first name that comes to our mind when we mention VPN. And rightfully so. Over the years, it has consistently delivered good results on all types of devices – mobile phones and computers.

With its presence in 59 countries and over 5400 servers, NordVPN is one of the best options for a VPN if you’re looking to access geo-restricted content. Because of its good speeds, it’s also great for streaming in HD. Best yet, NordVPN is highly secure thanks to military-grade encryption (learn more about encryption and decryption here) and an automatic kill switch that blocks all data in the event of a dropped connection.

It isn’t the fastest provider on the market, though. Some servers are running at 1GBps, but NordVPN is rapidly advancing, and soon all of their servers will have 10GBps capacity.

One huge update for NordVPN is that the company is heavily investing in its servers rather than renting, so it’s even a better situation now. On top of that, the company resides in Panama. As a result, NordVPN isn’t obliged to track and share your data.

NordVPN can work on Windows computers, Macs, iOS, and Android, meaning you can access it from any device. Speaking of gadgets, one account can access up to 6 devices simultaneously, which is a pretty fair deal for such a big name in the industry.

Unfortunately, there isn’t a free version, but the paid ones are not expensive at all.

The interface is user-friendly and easy to navigate, its Windows client is pretty good, and all of its mobile apps are great for their ease of use. Its expansive network of servers provides users with unmatched flexibility. And did we mention that it comes with a 30-day money-back guarantee?

It’s worth giving it a shot. There is nothing to lose at the end of the day.

Get up to 320 Monetha points per euro you spend on NordVPN with the Monetha app.

PureVPN has been a leading provider of online security and privacy since 2007. To date, it’s built over 6,500 servers around the world (78 countries) – one of the most extensive server networks on the market. The company also has a very wide range of features: 256-bit encryption with OpenVPN and IKEv2/IPSec, DNS and IPv6 leak protection, no logs policy, an automatic kill switch, and port forwarding to bypass firewalls.

It used to cover more than 100 countries in 2021. However, the company policy changed to select only servers with higher speeds and security standards. Many servers are switching from 10GBps to 20GBps, which is a lovely sign for users.

On top of that, you can use PureVPN on all types of devices – it runs on Windows, macOS, iOS, and Android. It also supports Android TV, as well as Amazon Fire TV.

PureVPN can be used on up to 10 devices simultaneously, which is excellent news. It also moved from Hong Kong to the British Virgin Islands and now passed the strict no-logging policy test.

As for the price, it comes with three plans:

Get up to 320 Monetha points per euro you spend on PureVPN with the Monetha app.

Private Internet access (or PIA in short) is a top-notch VPN provider. Currently, the company that owns ExpressVPN and ZenMate (Kape) is at the helm, so that’s good news.

It has over 35,000 servers in more than 80 countries worldwide, which is a staggering number! However, some slow 1GBps servers are gradually replaced with NextGen 10GBps serves and better RAM management hardware is in place to ensure sensitive information won’t get into the wrong hands if the servers lose power.

Private Internet Access VPN is available across all types of devices on all major operating systems – Windows, macOS, iOS, Android, and Android TV. You can link up to 10 devices.

Let’s see how it performs price-wise:

It is undoubtedly a very well-priced option and what we liked is that you can ask for a refund more than once.

Get up to 480 Monetha points per euro you spend on Private Internet Access VPN with the Monetha app.

Atlas VPN is a competent VPN provider that offers a decent all-around service for some of the lowest prices. It has support for WireGuard, for instance. You get iOS, Mac, Windows, and Android apps, a “kill switch” to protect you if the VPN drops, and a SafeSwap feature if you need to swap IP addresses while connected to a server. There are also ad and malware blocking and data breach monitoring alerts.

When it comes to servers, Atlas can’t be proud of what it offers – 750 servers across 48 locations, predominantly in Europe and USA, so it’s not a viable solution for global users but more than a good one for Europeans and North Americans. It was recently bought by Nord (the company that owns NordVPN), so it will benefit from development, and we can see progress in that direction.

But what sets this VPN among the best VPN services are the extras: like rotating IP addresses to help you avoid government tracking and the ad and tracker blocking system. I think any privacy concern is solved on this app.

Let’s see how this app does in terms of pricing.

Get up to 480 Monetha points per euro you spend on Atlas VPN with the Monetha app.

BlufVPN is a new, simple VPN service provider established in 2020. It’s interesting to see how young it is and how well its functionality is working. Feature-wise, it has a lot of similarities with other VPNs; let’s take a closer look.

Firstly, it does perform exceptionally well on Windows, macOS, Android, and iOS, which is quite good. The servers are over 500 (which isn’t much by any means) in more than 70 locations. It allows 5 simultaneous connections – a bit underwhelming.

BlufVPN offers 256-bit AES encryption to operate your data and hide it from any hacker. They offer various tunneling protocols, including IKEv2, UDP, TCP, and OpenVPN. The Windows client automatically uses OpenVPN, whereas the Android app defaults to IKEv2. You’re free to change the protocol as you wish.

It can successfully stream Netflix, Amazon Prime Video, and HBO Max and has an autorun option which means it will launch immediately after you turn on your PC.

Get up to 240 Monetha points per euro you spend on BlufVPN with the Monetha app.

VuzeVPN is a fairly new VPN service. Its name might ring a bell with torrent maniacs because it’s related to the popular Vuze BitTorrent. However, this VPN service has the potential to be a strong competitor in the market.

There’s a zero-log policy, but the servers available are just over 200.

It didn’t use to support devices other than Windows, but now we can see it’s much better now. You can access it on a Mac, iPhone, iPad, Apple TV, Android & Android TV, and other smart TVs. It supports up to 5 streaming devices simultaneously, which isn’t that much, but it compensates with a “kill switch” feature that’s a must-have to protect your online privacy.

VuzeVPN operates in US territory, which means citizens might have their online activity spied on because of the “Fourteen Eyes” intelligence-sharing program.

But how good is VuzeVPN when it comes to pricing?

Get up to 400 Monetha points per every euro you spend on VuzeVPN with the Monetha app.

Download the Monetha app, build your profile, earn money from your data and make the most out of your data.